Creative writing relies on images. If a reader can’t see what you’re writing about in their mind’s eye, they won’t be interested in reading further. When we write, our goal is to paint a picture for our readers. We want to create images that are so vivid, readers forget they’re reading and instead feel like they’re watching a movie in their minds.

When you’re trying to paint a picture for your reader, utilize the five senses. Imagine your scene now. Look around; what does your character see? Really try to see what your character sees in as much detail as possible.

Next, think about what they hear? There might be some background noise that’s relevant to the story. Also, consider the noises your character is making, and not just by speaking. Maybe they are shuffling their feet as they walk or tapping away at a keyboard.

What do they feel, both internally and externally? The coziness of their favourite sweater and a hot mug filled with coffee possibly. Or maybe they’re feeling anxious, scared, or excited. But don’t explicitly tell a reader how the character is feeling. Instead, dig deeper into those feelings. What does anxiety actually feel like? Not everyone experiences anxiety, and of those who do, not everyone experiences it the same way. Show your reader how your character experiences anxiety.

Don’t forget about smell and taste. Should the reader be aware of something burning nearby? Can your character taste the saltiness of the sweat on their upper lip?

Small details can enhance your writing and bring the story alive because your reader won’t see images unless you create them. As a writer, you see things exactly as you want your readers to, but you have more information than they do since the idea lives in your head. Be sure to spell out all the details (without insulting your reader’s intelligence) to create evocative imagery.

Use action in your writing. You’ll create more vivid imagery when characters are engaged in action with one another or speaking. Even thoughts can be active if they’re rich and detailed enough.

Keep your writing grounded in space and time. That could be a specific moment in time or a specific location. Some writers find it helpful to sketch their writing as part of their rough draft. This method anchors your scene in time and prevents you from jumping around and confusing readers.

Keep in mind that when you’re creating images in your writing, you shouldn’t merely be describing the scene. The scene should be the thing. Experience what your character is experiencing and put that into words. Visualize the scene and write what you see, not what you think, and the reader will see it too.

Learning how to show rather than tell will take practice. Nobody was spectacular the first time they wrote something. Many new writers will overwrite the analytical side of their story (commentary, analysis, explanations) and underwrite the experiential parts (action, dialogue, imagery). The only way to get better is to write and rewrite and keep writing some more.

But also read. Read to see how other writers paint pictures in their stories, learn from them, and try to apply some of those techniques to your own writing.

Give these tips a try and see how much your writing improves! 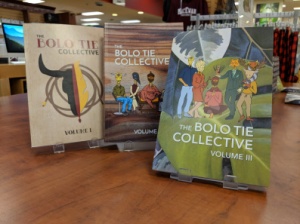 Tick tock... The deadline is only days away! If you haven't submitted anything yet, now is your chance!
We're back again! Come to @towersmacewan for Bolo Live, now two nights a month!
❗ATTENTION❗Our Jan 18th workshop is now being held Jan 26th.
There is still time! If you haven't gotten around to submitting your works, NOW IS YOUR CHANCE! The Collective has decided to give you until January 31 to get those pieces in for our 7th annual anthology!
Have a piece you've been (secretly) dying to share with the world? Join us @towersmacewan for our first BOLO LIVE of the new year! Bring that piece (or two... or three!) to start your 2023 by letting the world hear your voice. Whether you're performing, supporting family/friends, or simply curious to see what we're about, we can't wait to see you Tuesday evening!
From our Bolo Tie family to yours, may your holidays be filled with joy and peace ⭐
Loading Comments...
%d bloggers like this: